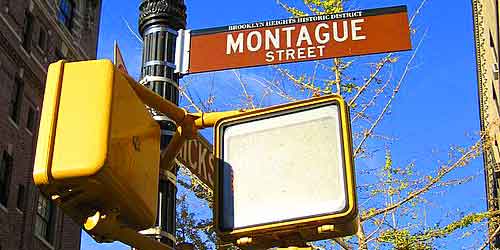 Even on the relatively warm Saturday night of March 10, when diners packed many of nearby Smith Street’s eclectic eateries, the less fashionable joints on Montague offered plenty of empty tables. After 10 p.m., as Smith Street’s youthful masses barhopped among its hotspots, Montague’s more mature (yet far less numerous) loiterers merely window-shopped, browsing the posted real-estate listings among the many brokerage offices lining its four blocks.

It seems that Montague Street is a victim of its own success; As it became popular for being an eclectic mix of locally-owned places, landlords decided to capitalize on this fame by jacking up the rent and actively looking for national-level businesses that can afford such prices. It's a short-sighted decision though, since they inadvertently pushed out what made the street special in the first place. Montague Street should serve as a warning to such areas as Smith Street and Park Slope: That is your fate if you give in to temptation.

So what's to be done? According to the NY Observer article:

[Judy Stanton, executive director of the Brooklyn Heights Association] said that her organization is presently lobbying city officials in the hopes of enacting tax incentives or zoning changes to counter the chronic loss of locally owned businesses on Montague and to avoid more banks, real-estate agencies and national chains. (“If we wanted the sameness of malls, we’d move to the suburbs,” mused the so-called First Suburb’s organization newsletter last fall, however ironically.)

What do you think? Is there any hope such tax incentives and zoning changes will be implemented? Would it be enough? Is there anything your average resident can do to help?

One other thing interesting to note from the article — the utter lack of nightlife on Montague:

“The thing I miss the most—I would say the biggest change in all of my time on Montague Street, which is approaching 20 years—is the tragic end of the nightlife on Montague Street,” said Mitch Cutler, owner of St. Marks Comics, which has occupied two different addresses along the corridor.
…
“When we first started there, we had much later hours, because there were people in the bars all night,” he said. “We were making money all the way up until 11 o’clock. But when there’s no bars, there’s no nightlife, there’s no foot traffic; there’s nobody to buy comics, either. So we shortened our hours.”

I never understood the aversion to drinking establishments some folks, including the BHA, seem to have. They don't have to be sources of degeneracy. Look at Floyd on Atlantic Avenue — not only do they host a bocce league, but people consider it such an upstanding establishment they frequently bring their parents, children, and dogs with them.