Elizabeth Gloucester made her name in Brooklyn Heights in the 19th century, and last week, her name became much better known, thanks to the “Overlooked” series in The New York Times.

“Overlooked” is a series that redresses oversights of the past, acknowledging the lives of people who, for reasons of race, class, sex, or ethnicity, were not given the honor of an obituary in the paper.

After growing up in Philadelphia, Gloucester and her husband moved to New York City, settling in Brooklyn in 1855. After the Civil War, she purchased the Hamilton Club, which stood at Remsen and Clinton, paying what would now be $3 million for it. It was one of more than a dozen rooming houses owned by Gloucester; her business made her among the wealthiest black women in the country.

She was also a philanthropist, raising significant sums for the Colored Orphan Aslyum, and she was an activist, counting as friends the antislavery John Brown and Frederick Douglass.

She died in 1883, and her funeral was held at the Hamilton Club. She is buried in Green-Wood Cemetery.
The Times recounts a scandalous love affair set at the Hamilton Club, along with the dangerous elements of Gloucester’s relationship with Brown and details of her thriving business and upbringing.
You can read the full story here, and I hope you will–it’s terrific.
Unfortunately, no photographs of Gloucester exist, and extant photos of the Hamilton Club are rights-restricted.
This menu cover is from The New York Public Library Rare Book Division, Frank Buttolph, Collector. 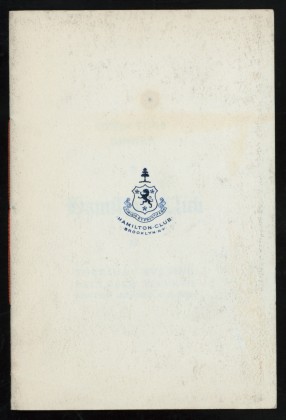