Brooklyn Heights pet-owners rejoiced when the little space on the corner of Hicks and Cranberry, too-long dormant, began to show signs of life.  A Heights institution for pet care, the veterinary practice had closed following the retirement first of founder Dr. Bernard Wasserman and later Dr. Richard Turoff, and in between the departure of Dr. C.J. Norton

“We had heard that the practice had closed,” said Thomson’s husband Jonathan last month from temporary digs in DUMBO, “and Heather had been looking around, looking to open her own practice.”

“Temporary” because after a year, BHVH closed again…but this time with a re-opening date in sight.

As clients well knew, the office was both charming and…well, let’s say quaint. Patient records were sometimes kept on index cards; the décor beckoned us back to the 1970s; and veterinary equipment, while competent, was limited, at least in part by the building’s antique infrastructure.

“We were able to run a practice, but not up to the standards that Heather would like,” Jonathan explained. “You couldn’t put in an X-ray machine, and if you printed something on a laser printer, all the lights in the place would dim.”

The plan had been to buy the practice and immediately begin renovations…but then the Thomsons came face-to-face with New York City bureaucracy.

The practice is covered by a zoning variance that permits a commercial operation in a residential neighborhood, but that variance comes with a stipulation: in order to maintain it, the business can’t be closed for more than two years.  The business became Heather’s in November of 2013, but the variance expired in January 2014.

“We had to open,” said Heather. “I figured I’d have a soft opening, not see many clients, then close in January and renovate.”

But between ending up “in the jaws of the city” red tape and a hearty welcome by local animal owners, Thomson ended up in business for a year, making do with limited equipment by drawing on resources of her former employer in the West Village and Veterinary Emergency and Referral Group in Carroll Gardens.

“In some ways it was a blessing in disguise,” offered Jonathan.  “We had such a positive response that we’re comfortable investing the money to make it what we want. We know it’s going to be a viable business because it’s been viable under trying circumstances.”

“We’ve also had a chance to meet the neighborhood,” added Heather. “We let them know we’re planning on being here for a long time.”

Since November, the business has been based in an office in DUMBO, unsuitable for seeing patients. Instead, Thomson makes house calls and on Wednesdays sees patients at Rocco and Jezebel on Pineapple Walk.

At the corner of Hicks and Cranberry, the office has been stripped down to its studs.  Electricity and plumbing are being replaced, and space is being re-configured to accommodate surgery and dental areas. 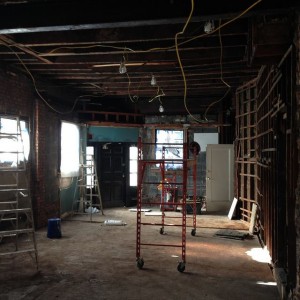 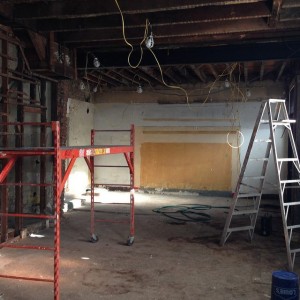 Thomson expects to re-open in early April.  In the meantime, clients can check the clinic’s Facebook page for updates and contact information or e-mail for an appointment or other information at Bhvh59 @ gmail [dot] com.

“We’ve been really happy to be in the neighborhood,” said Heather, “and to be able to continue the tradition of having a vet clinic in that office.”