Despite a 1-0 loss, Thursday was a glorious day for American men’s football, especially for Brooklyn-based spectators. As the US slogged through a midday World Cup match against Germany in a torrential downpour in Recife, Brazil, thousand of miles away raucous American and German supporters descended upon Die Koelner Bierhalle in Park Slope.

At stake? A spot for both teams in the 2014 Cup’s round of 16, and—for the US—recognition that they can compete at the world’s game.

Unable to take a preferred World Cup perch at The Custom House, your reporter sought a suitable location to watch USA-Germany. Strolling down Fifth Avenue in the Park Slope, a chance encounter with Rainer—a German-jersey wearing, flag-waving stranger—his nine-year old son Lucas (sporting a Mesut Ozil jersey) and their friend Joe brought us to DKB. 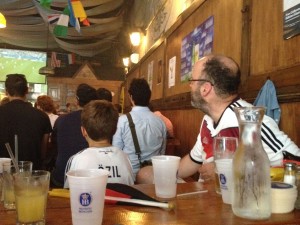 My new found friends and I settled into long, picnic-style benches in an enormous space topped by a single large fan that seemed to swirl around our collective excitement.

Rainer commented that the US, led by Jurgen Klinsmann, former player and coach for Germany, and a roster that includes five German-born players, was a kind of Deutschland farm team. The question was: could Klinsmann’s “students” school one of the world’s top sides and in the process advance to the knockout round for a second consecutive Cup—unprecedented for an American squad.

Complicating matters was that Portugal and Ghana—members of the “Group of Death” along with the US and Germany—were playing in Brasilia at exactly the same time. Only two teams from Group G would advance, and fear was that Ghana might leapfrog the Americans.

Pre-match buzz centered on how favorable a tie was for both sides; Germany could ease into the second round bringing along the US. But given Die Mannschaft’s history, anything besides a win would look like match-fixing, as current German coach Joachim Löw was Klinsmann’s top assistant for Deutschland’s 2006 World Cup team.

Based upon how relentlessly they attacked the American defense in the opening 20 minutes, Löw’s team was clearly not playing for a draw. Germany’s Özil and Jérôme Boateng repeatedly swooped in from the wings, exposing a plodding American defense.

Just when things look bleak for the Stars and Stripes, into DKB strolled Sebastian, a German friend of Rainer’s also decked out in his country’s colors. Almost in spite of their relentless German boosterism, the US settled in. At the 22nd minute American Graham Zusi—hero of the Ghana match—blasted a shot just over the German crossbar.

At the 34 minute mark, the crowd roared when ESPN posted Portugal 1, Ghana 0. This news, and the fact that US achieved a scoreless first half, buoyed most spectator’s spirits.

When the second half got underway, it’s still all Germany. At the 55 minute mark Germany breaks through; Howard stopped a sizzling strike, but Mueller’s rebound is hit so hard the American keeper can’t get a glove on it.

This inevitable result—90% of the game has been played in the US side—results in extra anxiety, amplified when ESPN flashes that Portugal and Ghana are now tied at 1.

The Germans continue to dominate; can the US recover? Rainer—a true fan who will go to Brazil for the Cup final if Germany is playing—cautions that if the Yanks press for the equalizer Die Mannschaft are superb on the counterattack. At the 73rd minute Americans Jeremiah Jones and Alejandro Bedoya collide sharply in front of the German net. Jones wobbles off the field but returns a minute later.

The crowd’s confidence is as wobbly as Jones’ gait until the 80th minute. When Portugal goes up 2-1, a collective roar—or sigh of relief—is released.

In extra time the US shows some fight. Bedoya has a chance in front of the German net which is defended by a sliding Philipp Lahm. Dempsey sends a header over the crossbar.

No goal but no matter; Germany wins the group and the US advances to play Belgium on Tuesday. Or, as Rainer says of his team’s 1-0 win, but equally true of the Americans: “In Germany they would say they ‘Managed the result.’”