Montague Street Radio Shack Tuning Out By End Of August

The long-lived Radio Shack at 110 Montague Street is vacating the premises by the end of August, a store manager tells BHB, for the reason one might expect… a marked hike in monthly rent. The RS staffer told us that sales in the neighborhood don’t merit the increase, so the franchise has decided to say so long to the Heights.

The space is being leased by Douglas Elliman, whose listing says the 1,425sf space is available for $15,500 a month. More:

“Prime Retail Space For Lease in Brooklyn Heights. Over 1,400sf plus some basement storage and possible access to 1,000sf south garden. No stairs to this street level walk-in space. Heavy street traffic especially during the workday from nearby courts and office buildilngs. Eight subway lines nearby, easy walk to DUMBO, Fulton Mall, the Brooklyn Bridge Park. No Food. Available October 1, 2013. 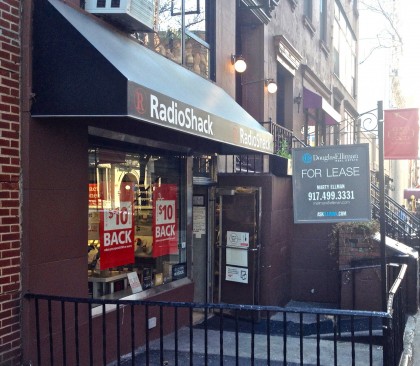