By Chuck Taylor on August 8, 2012 9:23 am in Brooklyn Heights, Brooklyn History, Government, Transportation

Three City Council members representing both Brooklyn and Manhattan believe the Brooklyn Bridge needs to fatten up. Citing tight quarters along the pedestrian and bicycle paths, the members proposed Tuesday to widen the upper-level platform for tourists and commuters.

The New York Times reports that Brooklyn Councilman Stephen Levin suggested that “the engineering and ideas community” could be enlisted to widen the artery by as much as three times its current span, perhaps through a competition organized by local design groups.

Likewise, Councilman Brad Lander of Brooklyn, believes that “just looking at how the path goes around the buttresses gives you a sense that a wider path is feasible. If it can widen out there, surely we can find a way to widen it out elsewhere.” Councilwoman Margaret Chin, who represents the Manhattan side, also attended the event on Tuesday to lend support.

Lander’s office says the city Transportation Department has not yet been consulted about a possible plan, though Seth Solomonow, a spokesman for the Transportation Department, said the city shares their “interest in enhancing safety and accommodating the growing number of people crossing this iconic transportation hub and tourist destination.” Any proposed designs “would be part of a long-term look at improving bridge access and safety,” he said.

The width of the main portion of the 129-year-old Bridge’s pathway varies between 8 and 16 feet. A bike lane on the bridge can comfortably fit only one rider in many areas, though traffic is intended to flow in both directions. The council members cited a Transportation Department estimate that 4,000 pedestrians and 3,100 cyclists cross the bridge each day. 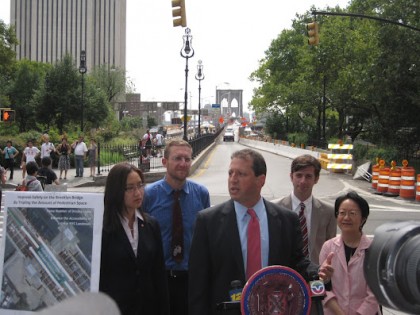