Matthiessen was born in 1950s Paris and grew up in Greenwich Village. After marrying, having twin sons and divorcing, he moved to Amity Street in Cobble Hill and in 2004, “met a soft-spoken bassoonist named Claire de Brunner” at a party,” the Times says. She tells the newspaper, “I heard his voice across the room, and I fell in love with it.” He adds, “Ours is very much a love story.”

She had moved to Brooklyn Heights in 1979, shortly after graduating from college, and was renting a one-bedroom in Cobble Hill when the couple met. In 2010 they married and last year, bought a “quirky 2-bedroom apartment in an Art Deco building on Joralemon Street” for $500,000, where Matthiessen (who is now blind) and de Brunner live with his guide dog, Goose, and her cat, Gretel. NYT: “They were introduced to the place by Phyllis Elliott, an energetic broker from Corcoran whose leopard suede boots Ms. de Brunner still remembers fondly.”

And the description of the couple’s apartment…

As a legacy of the structure’s former life as an office building, the apartment is oddly shaped, not the ideal setting for someone who cannot see. ‘There’s no such thing as a right angle,’ Matthiessen said. ‘Every room is slightly crooked, which is part of the charm. But for a blind guy like me, it’s hard.’ Yet for someone like Matthiessen, who is extremely sensitive to noise, a fourth-floor space on a quiet residential street is prized.

The smaller bedroom has been converted to a music room. In the evening, de Brunner sits in front of the music stand and practices [bassoon], invariably with Gretel curled up on the sofa. ‘I think she’s listening. I can see her ears move.’

The subdued décor is enlivened by exposed brick walls, shimmering sea-green Italian tiles in the kitchen and gleaming cherry floors that remind de Brunner of the variety of maple woods—mountain, black, sugar, curly—that bassoons are usually made of. 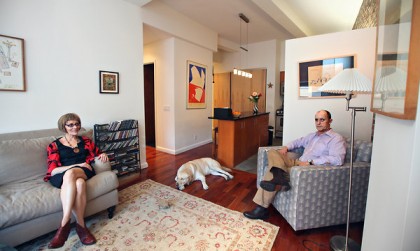