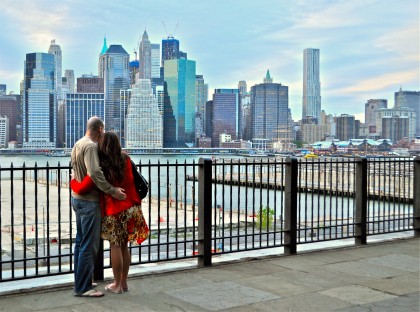 New York couple Michael & Danielle take in the view from the Brooklyn Heights Promenade on the day national headlines proclaimed that One World Trade has surpassed the height of the Empire State Building—to once again become New York City’s tallest building. With its unfinished frame, the structure now stands at just over 1,250 feet high.

It will be at least another year before the tower—which broke ground five long years ago in 2006—reaches its full height of 1,776 feet , including a 408-foot spire. At that point, it will be deemed the tallest building in the U.S., the tallest in the Western Hemisphere and the third tallest in the world.

By comparison, the Empire State Building is 1,454 feet from the ground to the top of its antenna. Sans the antenna, Empire State is 1,250 feet—the figure that fostered Monday’s kudos.

New York Gov. Andrew Cuomo stressed the site’s symbolism of rebirth: “The new World Trade Center is more than just a skyscraper: It is a symbol of the enduring spirit of the city and state of New York, representing our commitment to rebuilding stronger than before.”