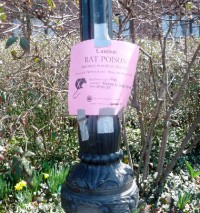 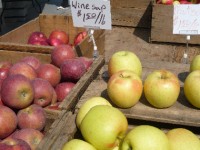 Spring has sprung at the Brooklyn Borough Hall Greenmarket now open on Thursdays in addition to Tuesdays and Saturdays.  Thought the calendar says it’s spring, the nice folks at Phillips Farms let us know not to expect asparagus and other typically seasonal vegetables until later this month or early May due to the weather.  This […]

Updated with News 12 Brooklyn Video after the jump The new and improved Gristedes on Henry and Clark is open and if the pistachio muffins are indication, it’s the beginning of a beautiful friendship. Share this Story: Tweet

The Finks have just returned from what was a surprisingly well organized and enjoyable evening at Saturday night’s Diesel Rock n Roll Circus on Pier 3.  Joining 17 host cities including Tokyo, Milan, London and Paris, Brooklyn Heights  hosted the finale of the jean company’s world wide day of concerts celebrating its 30th anniversary. The […]

First the good news – this rat found a parking space on Willow Street this morning.  Now the bad news – it was a street cleaning day and he was parked illegally.  And paid the price. Photo: Mrs. Fink Share this Story: Tweet

My curious friends, You better be prepared to move your sweet rides before the reappearance of S and B ruins your day. Catch the click filming on Clinton and Schermerhorn Streets.  Won’t it be nice to see Dan Humphries in his home borough!  Do you think we’ll see Chuck Bass back from his fabulous and […]

A car with its alarm blaring on Henry Street near Joralemon was slapped with this note, scrawled with what appears to be a Cornflower Blue Crayola: Share this Story: Tweet

Brooklyn Heights' resident/King of All Literati, Norman Mailer, is featured in this week's New York Magazine: New York Magazine: The Rise of Mailerism…: In a six-decade career, Norman Mailer has written thirteen novels, nineteen works of nonfiction, two poetry collections, and one play. He’s directed four movies. He ran for mayor of New York, and […]

Over the last few weeks, BHB has noticed an odd and ominous trend — restaurant mascots are being brutalized. Sure, some of you reading this may have roughed up a Bob’s Big Boy statue during your college days, but he probably deserved it. However, the mighty mascots of the Heights are just innocent standees trying […]