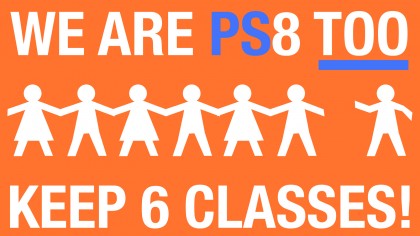 Parents of children both admitted for Kindergarten at P.S. 8 and those wait-listed for 2015 have joined together and launched a Change.org petition.  They urge the DOE to re-instate six Kindergarten classes for the fall of 2015 and to publicly engage the community to create meaningful medium and long-term solutions to overcrowding.

“Warnings to the community after the deadlines for other available options have passed do not constitute a plan.  The lack of transparency throughout the admissions process and the failure of the DOE to come up with a short-term strategy have shifted the burden to families.  The consequences are being shouldered by our children.  Parents are forced to make hasty decisions about the most important issue in their young children’s lives:  education.

The petition can be found in its entirety on Change.org.  The group also has a Facebook page.

Last Minute Weekend Suggestions: Brooklyn Heights and Nearby
Save The View Now Scores in Opening Round of Pierhouse Litigation